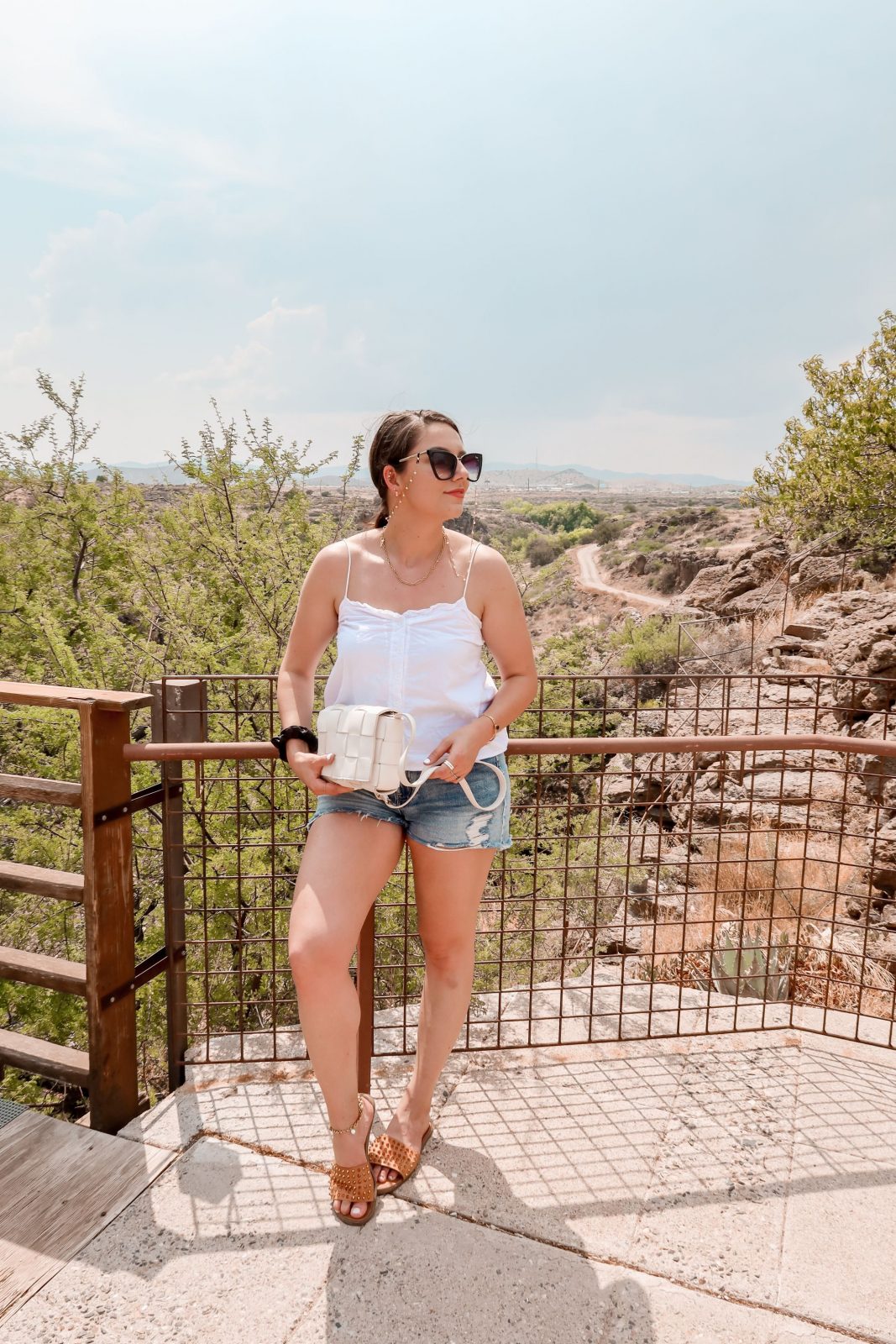 3 Spots Worth Seeing on your Drive from Phoenix to Sedona

On the recent trip to Sedona, my friend had done a bit of digging and found some amazing places to visit on the drive up to Sedona, from Tucson. Specifically everything is in the Phoenix to Sedona range, but since we live in Tucson and there's not a lot to stop for from Tucson to Phoenix, I figured it made sense to explain it's mostly Phoenix onwards.

My friend Ashley is vegan, and has spent a lot of time in Phoenix so she knows all the good delicious (and healthy) spots. Once we got to Phoenix, we stopped by Nami's to grab some coffee and then right next door is Green which has vegetarian and vegan food options. I have been on a latte kick lately, so I grabbed a latte but then I also ordered the peanut chicken wrap from Green, which was seriously so delicious. It didn't have any meat, mock chicken in fact, which surprised me since the mock chicken was delicious. I could definitely eat that wrap over and over. 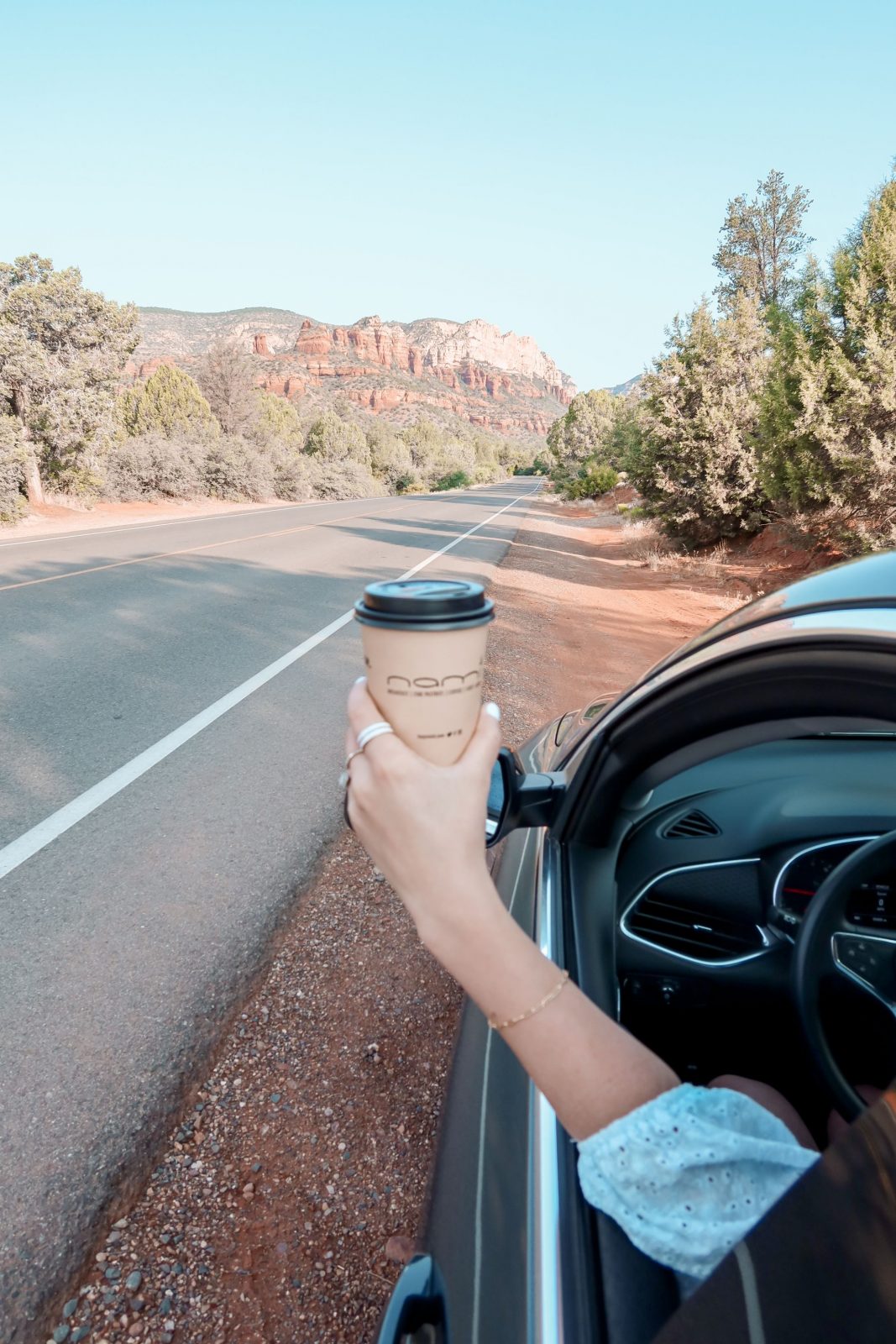 We stopped off the Arcosanti exit once we passed Phoenix (easy exit + lots of signage.) At the moment it looks like a QuikTrip is being built right off that exit so there's lots of construction, which you need to go around to get to the entrance. The dirt road leading to Arcosanti is very bumpy so if your car's tires haven't been checked recently, I would be very (VERY) careful. We had a rental and it was rough going 10-15 mph, but it is a dirt road so that kind of rockiness is expected.

"Though the original design of Arcosanti is described in Arcology: The City in the Image of Man, Soleri’s magnum opus on arcology, called for a place where thousands of people would live and work, Arcosanti has never been occupied by more than 100 people. Despite that, it continues to be regarded as an early example of sustainable architecture and vertically-dense building that prioritized live-work spaces and the surrounding natural environment over urban sprawl. Dubbed “the urban laboratory” in the 1970s by famed New York Times architecture critic Ada Louise Huxtable, Arcosanti continues to experiment and test its own potential as a working alternative to urban sprawl, erosion of communities, and neglect of the environment while supporting its residents to lead lives that are enriched socially, energetically, and economically."

This was the first time I'd seen the monument and it was a really cool 20-30 minute excursion in the Camp Verde area, which is just 45 minutes outside of Sedona. This castle used to house over 20 families, and it's so interesting since it's literally in the side of a mountain. If there was an elevator, I would definitely love to stay up there but it's a really cool point to drop by, read a little bit about the history and then continue on your way to Sedona.

Have you made the drive from Phoenix to Sedona before?

Phoenix and Sedona have been on my Us bucket list for as long as I can remember. Dying to make it out one day!

wow!!! ive only been to phoenix once but would love to get out that way again sometime. the landscape is almost unreal!

Definitely sounds like some must see places! Will need to make a point to take note should I ever visit the southwest! xoxo, Sarah

Fun! I’m bookmarking this for the next time I can travel to Arizona!!

I haven’t made the drive, but I would love to visit Montezuma National Monument! You captured it perfectly.

I have been to Phoenix once and would love to visit again and also check out your recommendations. Love the pictures.

Wow these are so cool! We were supposed to go through a few weeks ago but cancelled :-/ will definitely have to keep these in mind next time we’re there!

How cool are these spots?! I’ve never been off the East Coast, but I really hope to change that in the coming years. Is there ever a time when these spots aren’t blazing hot? That’s my only concern with traveling west – I hate the heat haha. I try to take all my vacations during autumn anyways, but I’m assuming late winter is probably the coolest season, right? I’d love to see all of this in person without melting haha!

I’ve never been to Arizona but Sedona has been on my travel bucket list for awhile now. I’ll have to make the trip once things return to “normal”.

These sound like amazing places to visit! The mock chicken sounds like a delicious twist and i have always wanted to go to Montezuma Castle!