How Being Fake Hurts You - adaatude Skip to the content 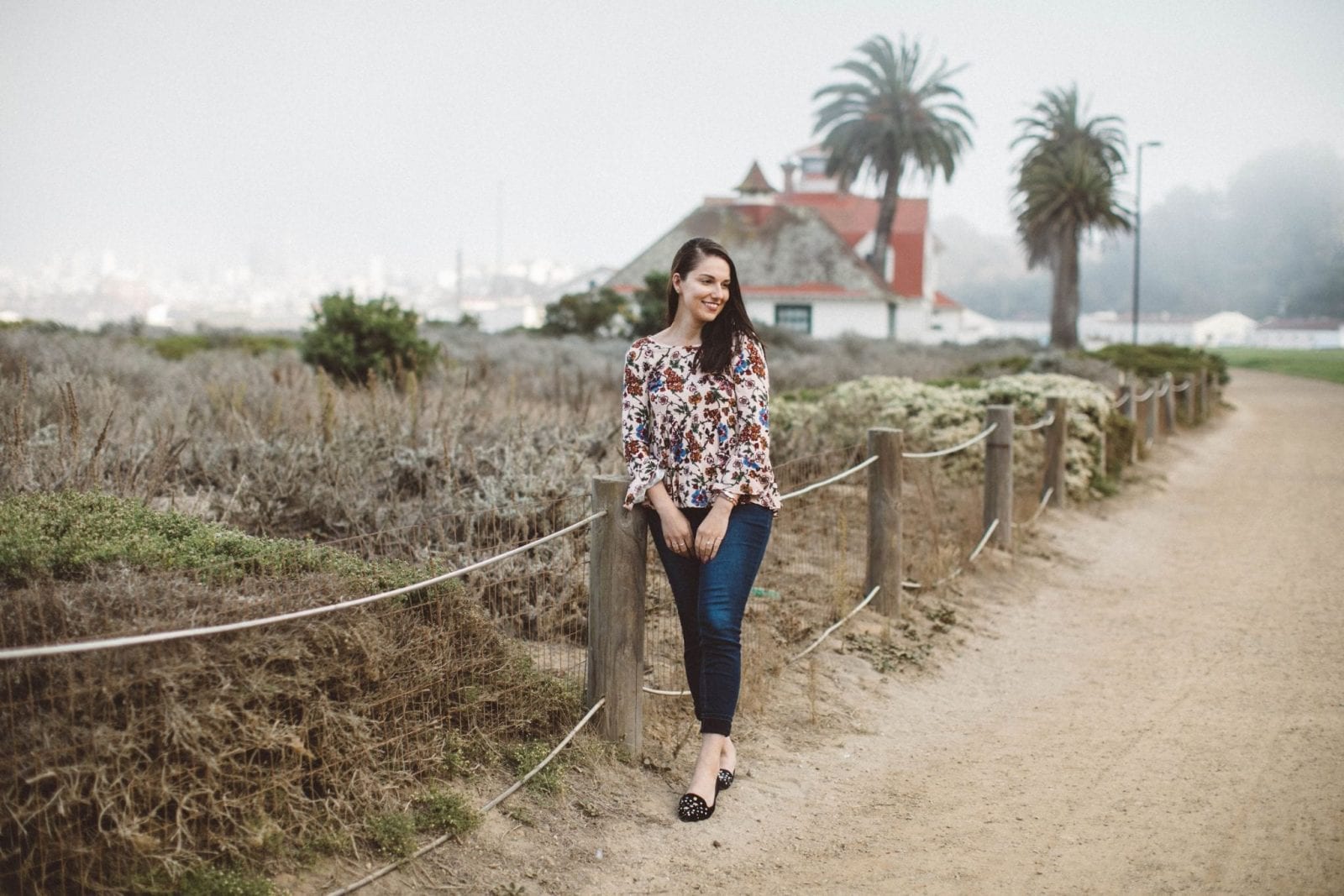 How Being Fake Hurts You Long-Term

Be the REAL You

When I say fake, I mean the fake when you  pretend to like something, agree with anything anyone says, and are just not the person you really are and want to be. The over exaggerated responses. The willingness to do what everyone else wants to do. Not making time for yourself and your own interests. Whether it's intentional (trying to get someone to like you) or unintentional and due to shyness, etc. is not what I'm here to discuss.

Ok betch, shut the f%$& up. How about them apples? Nobody wants to hear your over exaggerated fake ass reactions, and plus everyone knows they are fake.

Let's get into how this affects you, no matter what career or lifestyle you choose.

Whether you're a blogger, corporate woman, family, friend, foe, etc etc, it is so important to be yourself. Being a fake version of yourself and not being you is such a detriment to you, as well as those around you. There's no reason to pretend, and there's certainly no reason not to act like yourself. Trust me, this is coming from someone who knows the ropes.

I pretended to be someone I wasn't for years. I just wanted to be accepted.

After I was "accepted", my life seemed worse than ever before. Sure I was going out with friends I didn't think would have ever liked me, but my grades suffered, my health suffered and I just felt hungover and sick all the time. It was just not the one, and definitely not something I wanted to pretend to be someone else for.

As you grow older, you realize that doing extreme thing just to fit in with any particular group is just not worth it in the slightest. What's the point of pretending to like something someone else really likes? Just to find a topic of conversation? ...that's no longer good enough. I don't have to pretend to like football and you don't have to pretend to care about makeup. It's so much easier to be honest with each other from the beginning and build a true friendship rather than a fake one.

At the moment, I am genuinely addicted to embroidered items and in particular embroidered shoes. Of course, if you're following over on Instagram, you know that I am addicted to floral patterns as well. Whether it's floral embroidery or just embroidery, I love it on jeans, or shirts, I am in love with the florals. Summer, winter, doesn't matter to me!

Fake ass shit when it comes to business.

At this point in my life, I have no time and most importantly, no patience for fakeness.

If I have to deal with you when it comes to business, I will deal with it and move on. I don't want to socialize or know about you when you're fake. I do not care if we work together. If you're fake, I will not give you the time of day.

However, if you're a blogger, you've worked with some PR companies. I honestly think PR folks get a bad rep in some instances, but emailing and talking on the phone with PR folks is sometimes so hard. I cringe for most of the call because they're so excited, overly loud into my ear, and just plain giddy to some degree. That type of behavior is personally not professional to me and I find it annoying. Not every conversation point need to incite a squeal.

In some rare instances, one of the PR individuals I get to work with are super cool, down to earth and become a true friend to me. That is the type of person I want to have in my life. Not the person pretending to understand and agreeing just because.

Your entire life has molded you into the person you are today. Do not be someone who is pretending to be something he or she is not. My advice is to be the real you. Don't let anyone else dictate who the real you is, and if they try to make a case, tell them to keep walking. I am not here to appease any one specific person or pretend to be something I'm not. The most important thing to remember is that in some instances, you will be super excited and over exaggerated, but make sure your reactions are genuine and real. There's really no point in pretending with others, as eventually something's got to give.

It's a lie. How long can you participate in a lie? The worst part about lies is that they tend to bite you in the ass down the road and you build a web of lies. One lie leads to more and more to cover over the first, and it's just never worth it. When you are yourself, you can do what you want and ask for forgiveness if something you do or say down the road has offended someone you genuinely care about.

After trying to fit in for years, I finally realized that I would rather be myself and do things I like. I would rather be the goofy, song singing, Instagram posting, embarrassing dance and terrible joke giver I am (ok, I'm funny sometimes.) I prefer to read a book, or my favorite blogs, with some wine at home. I don't want to be in the club, I don't want to take shots and I certainly do not want to be sick the next day and affecting day after day with hard drinking. I pretended to be that person for a while. So much so that I thought that was me, but I've realized I prefer to do a beer tasting...for an hour. Not until 4 in the morning.

After I realized how happy I was doing things that had nothing to do with my old lifestyle, I stopped doing them altogether. I became who I was, and I speak my mind now. Honestly, sometimes more than I should (as my friends know now) but it is so much better to stick up for myself, read a book if I want, sip on wine at home and say no to any person asking me to party until 2 in the morning. No thank you Felicia, I'm good right here. 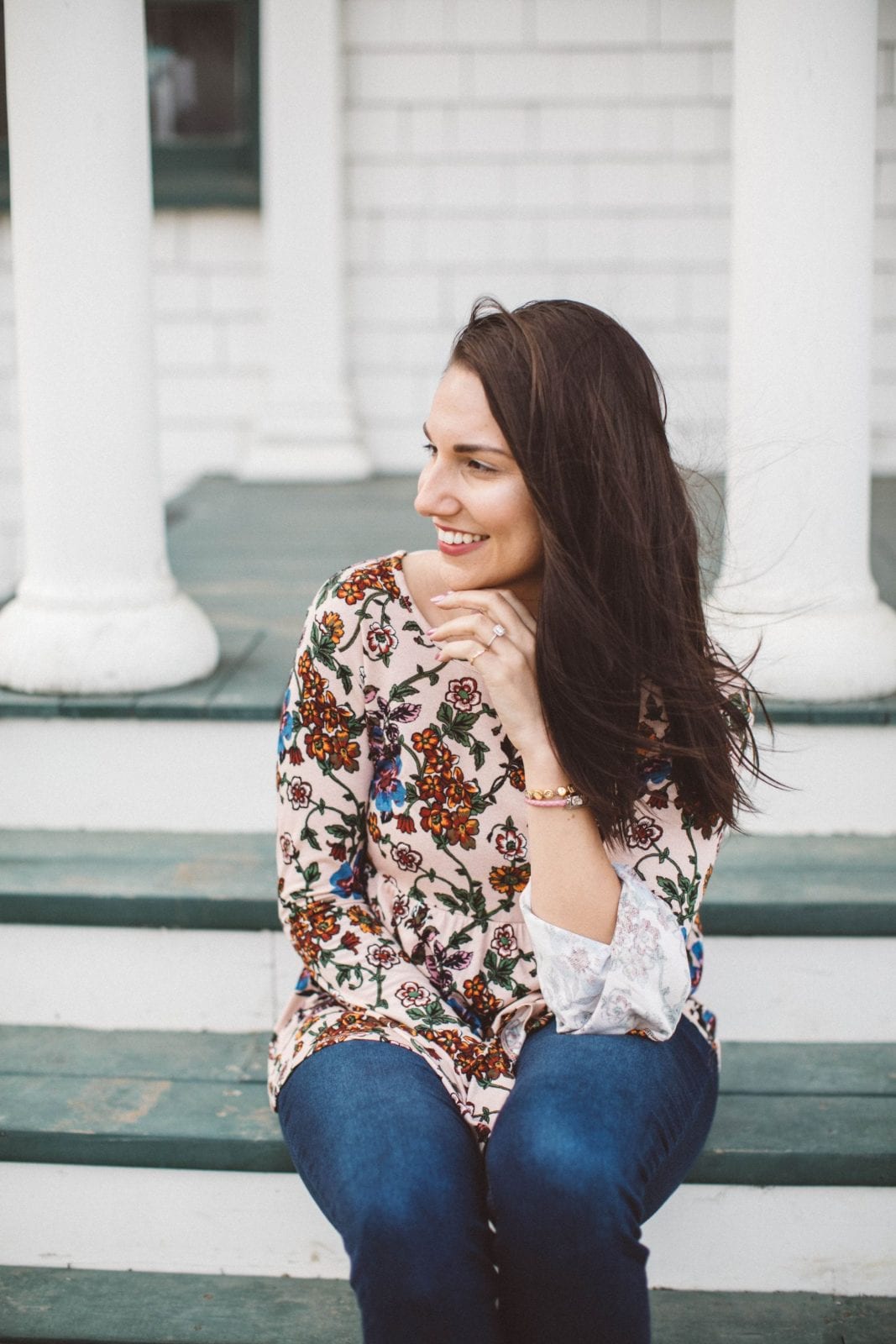 When it comes to this outfit, it's the perfect "Ada" outfit. Casual, yet super cute and comfy.

These flats are so cute as the embroidery is awesome. When it comes to this top, I've gotten an insane amount of compliments. Floral, peplum sleeves and an open back. All super trendy and in. Ready for the most comfortable jeans you've EVER worn in your life? Yep, you heard it from me. MOST comfortable jeans that don't dig in viciously into your stomach.

When it comes to the jewelry, you know I'm rocking Monica Vinader pieces including this ring and this customized bracelet. 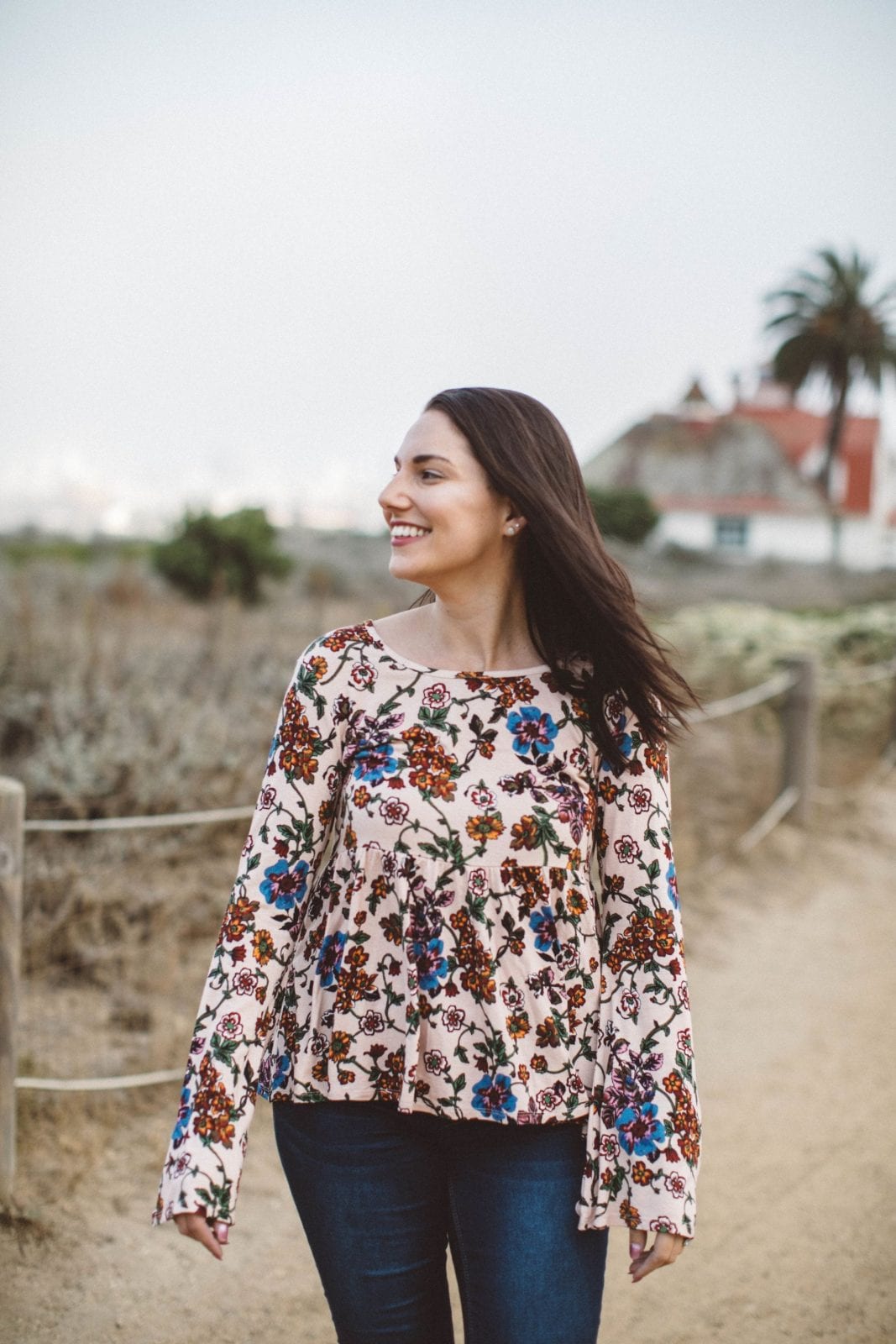 I am happy and free, now that I am who I want to be. Now that I don't care about "fitting in" just because.

'tis the season to give back! I’ve teamed up with an amazing group of bloggers
to give YOU a chance to win:

a $1,000 Nordstrom Gift Card, to make your holidays just a little bit sweeter!

Simply enter below by completing the rafflecopter. You’ll receive one entry per completion. This giveaway is open internationally and runs until end of day 11/20. Winner will be announced here. Good Luck!

*this giveaway is in no way sponsored by Nordstrom.